Our Meal with the Queen! Dinner & a Show at Medieval Times in Lyndhurst, NJ 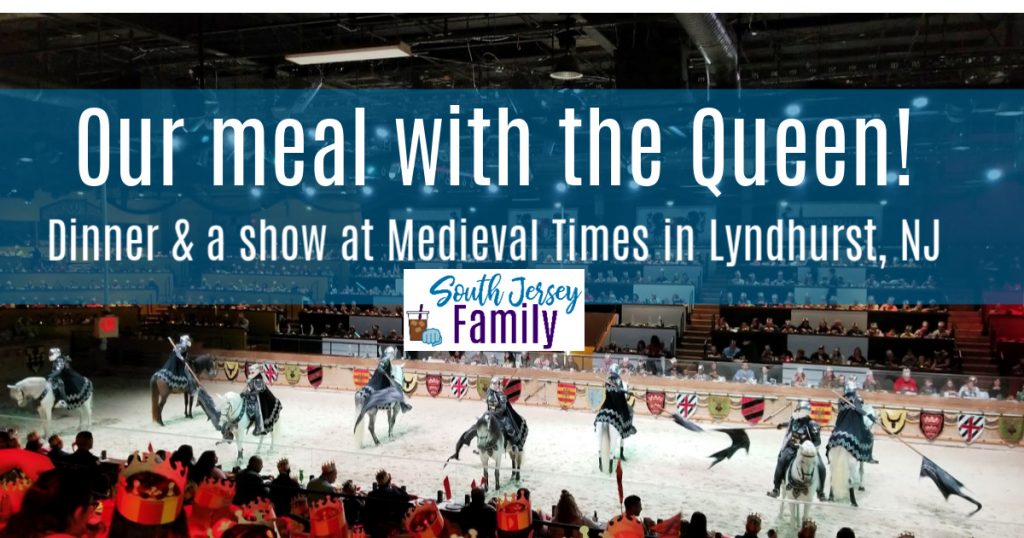 Do your kids spend a decent amount of time playing make-believe? Mine do! They love to pretend they’re building a space ship to fly into outer space or will pretend they’re sailing a ship on the high seas to capture a dangerous sea creature. They can turn brooms into horses and, suddenly, they’re knights battling to save their kingdom. They have a TON of fun and, as a parent, it’s heartwarming to see them have such wonderful imaginations. This is why, when I received an email asking if I’d like to be part of the Royal Bloggers Network with Medieval Times, I got so SO excited! OF COURSE I wanted to be a part of that network. I remember going to Medieval Times as a child and loving it, so I knew that, not only would my boys enjoy the experience, but my husband and I would have a blast getting to experience it with them. As a blogger, I knew this was a great opportunity to help other South Jersey families plan some family-fun for themselves, too! Long story short, I emailed them back and we quickly got our first visit scheduled.

The Mister and I decided to keep our visit to Medieval Times a surprise for the boys. Do you do this with your kids? I feel like it makes for a car ride full of suspense and wonder and makes for an even more exciting reveal when we pull up to our destination. Medieval Times is about an hour and a half from Cherry Hill. It’s a pretty easy drive and we didn’t hit much traffic on that particular Saturday. Medieval Times is super close to the Newark Airport, so it can get a little crowded towards the end of the ride, but it was no big deal. If anything, we enjoyed the little bit of congestion because it allowed us more time to watch all the airplanes taking off and landing.

We went the entire car ride and they had no idea where we were going. As soon as we got off the highway exit and saw the building that looked like a castle, though, they got so excited! Still, they were clueless as to what Medieval Times was, but, they saw a castle and that was reason enough to realize that something awesome was about to happen.

Medieval Times has free parking to the side of their building. Their main lot was all filled up when we arrived (about 25 minutes before the show was to begin), but there was plenty of additional parking in an attached lot. 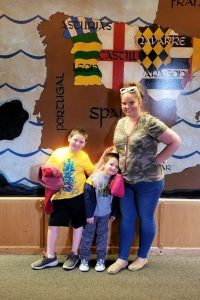 To enter the building, we walked through a side entrance and got into line to pick up our tickets. In addition to the decor, all of the of the Medieval Times staff were dressed up in period clothing. It was so neat feeling as though we’d been transported back in time! There were multiple people working the counter to purchase/pick up tickets, so we were in and out of that line in no time. After getting tickets, we were given 4 hats that had our house colors on them – we were red and yellow – and then we walked into a photo opportunity area. We got our photo taken with a sword in a stone, but there was also an option to have a photo taken with a knight. The photography was very low-pressure. If we didn’t want our photo taken, that was ok, too! There was no pressure either way and I totally appreciated that since I’d been to other places that seemed to make people feel guilty if they chose not to do a photo. 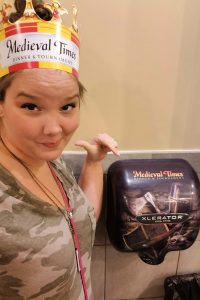 It’s possible I though the themed hand dryers in the bathroom were pretty awesome.

Once the photos were done, we walked into a giant room. There was a bar set up on one side and, along the other walls, multiple glass display cases filled with toys, figures, and other medieval-era paraphernalia. I thought the boys would be super excited to look at all that was offered in the shops, but, instead, they really needed to use the bathroom! Luckily, Medieval Times has MULTIPLE bathrooms available for use. *And all the parents cheer!*

So, everyone did their thing and then it came time for all of us to take our seats. From a balcony in the main hall, our colors (remember, we were yellow and red?) were announced, one by one, and we were instructed to walk through a doorway and into the dining area. You guys…this was so cool! In the center of this GIANT room is a long oval-ish (kind of rectangle, kind of oval?) area where the show takes place. Then, everyone sits around this area in long rows. When you go, you will have an assigned row, but not an assigned seat. Seating is kind of family-style, so you will most likely be sitting next to someone you don’t know. The Mister and I usually like to sit on the outside and keep the boys on the inside when we encounter these kind of seating arrangements. You don’t need to interact with the other person sitting next to you or anything, but just be prepared to sit next to someone you may not know. 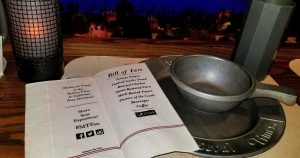 We all got situated in our seats and then started looking around. There was a paper napkin on the tabletop that actually had the menu printed on it! Pretty cool. Big Dude is my little foodie, so he immediately started to read what we would have for our meal while Little Dude just took in the sights. Our waiter stopped by to introduce himself and poured each of us a drink of our choice (a cola, diet cola, lemonade, or water). Next, the waiter brought a carafe of tomato soup! RIGHT?! He poured tomato soup into each of our metal bowls and, then the fun really started to begin. Big Dude asked where his spoon was so that he could eat the soup. You guys…meals at Medieval Times don’t happen with silverware!! It BLEW his mind (in a good way) that he was supposed to eat his soup by drinking it. There was a handle on the side of the bowl, so that made it easy, but the boys both thought it was the greatest thing ever that they were to eat the entire meal using their hands. In essence, they had permission to “play” with their food. 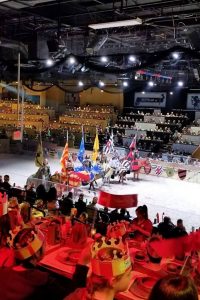 While we ate our meal, an amazing show happened before our eyes. Knights rode on horses and “fought” with each other (with real weapons!) in competitions. It was all so realistic – I could even see sparks flying from the weapons when the clanked against each other! It was very apparent that these knights had been very well trained to act the part of a realistic medieval knight. The boys were amazed at the demonstrations and I often looked over to see their mouths open wide as they watched the “fighting.” In addition to the knights, a white horse dazzled us with it’s tricks and poise. There was even a falcon (!!!) that flew all around the room – even over top of those of us dining. Now, watching the knights was pretty awesome, but, being the animal lover that I am, I’m pretty sure I loved watching the horses and the falcon the most. 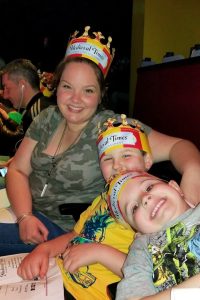 All in all, our experience at Medieval Times was pretty awesome. When we were all done, I asked the boys what their favorite parts were. Little Dude did not hesitate to exclaim “the fighting!!! That was so awesome!” while Big Dude said “The food!” (mama’s little foodie!).

Since we are part of the Royal Bloggers Network, we will be visiting Medieval Times another time soon for some special experiences. We can’t wait to go back and tell you all about it!

Want to plan a trip of your own to Medieval Times? Here are some direct links to their info:

About the Medieval Times Show

Have you ever gone to Medieval Times? What was your favorite part? 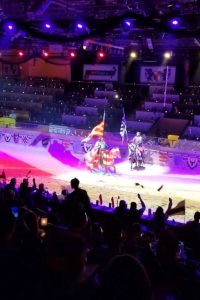 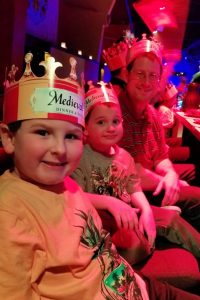 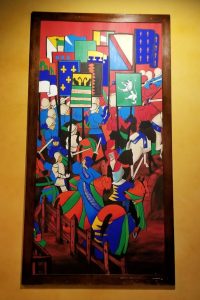 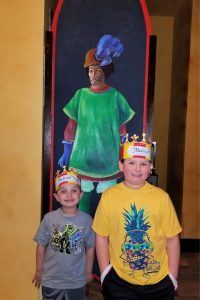 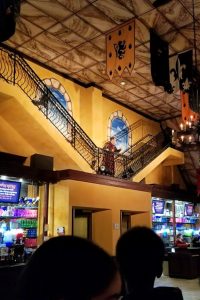 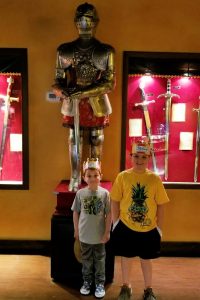