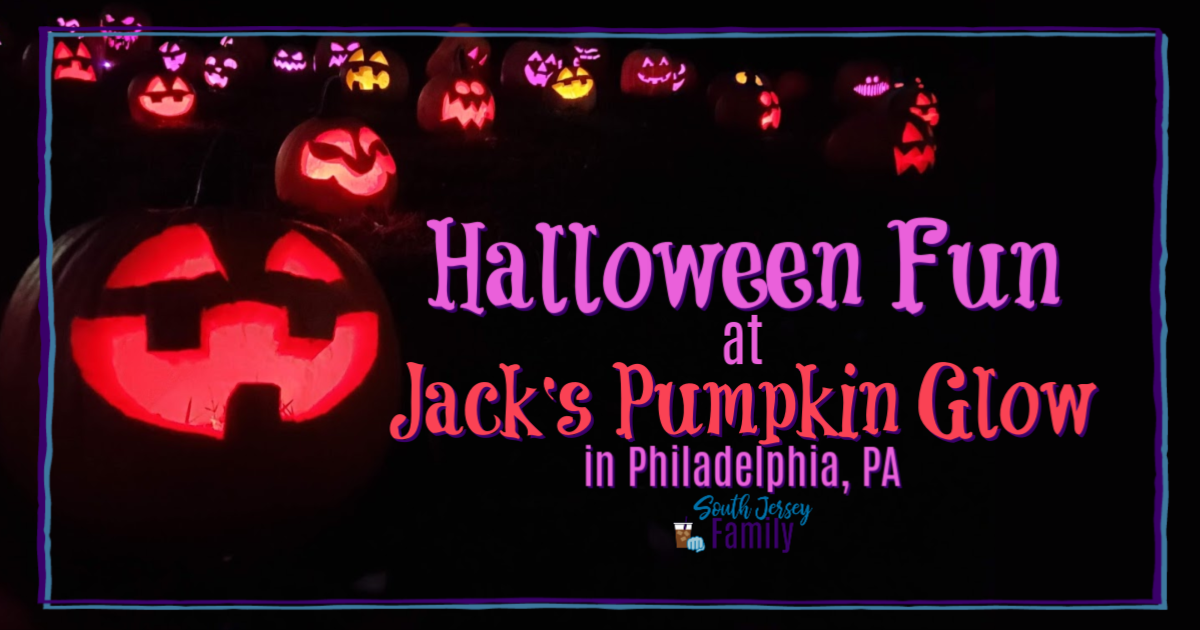 Thank you to Jack’s Pumpkin Glow for providing my family with tickets to attend this event in Philadelphia! All opinions and thoughts expressed in this article are honest and my own.

I LOVE that my boys are at the age when they get excited about the holidays. I mean, they’re 5 & 8, so they’ve had some time to figure out what goes on and why holidays are so much fun, but it’s just awesome that they want to visit attractions and events just like The Mister and I do. Recently, we had the opportunity to attend Jack’s Pumpkin Glow in Philadelphia, PA. If you remember my previous article, Jack’s Pumpkin Glow is coming to Philadelphia! Ticket Giveaway!, you know a thing or two about this event. If not, no worries! I’ll explain it all to you in this article! 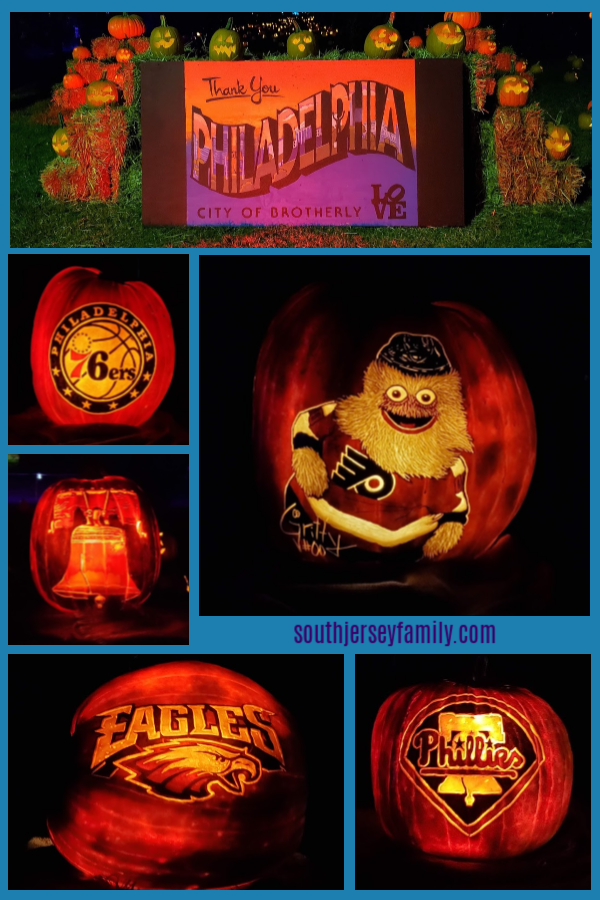 So, Jack’s Pumpkin Glow is a family-friendly Halloween attraction that features over 5,000 hand-carved jack-o-lanterns displayed in exhibits throughout a 1/3 mile trail. We had one of the earlier time slots (6:45 pm) and, while I was worried that it wouldn’t be dark enough to fully experience and appreciate the attraction, the timing ended up being perfect. But first, let’s back up a bit.

The Philadelphia location for Jack’s Pumpkin Glow is right by West Fairmount Park. It’s super easy to get to from South Jersey (I use the Waze App for GPS – it’s free and fabulous!) and took about thirty minutes to reach from Cherry Hill. When we arrived at the location, I was VERY pleasantly surprised to see that the parking for Jack’s Pumpkin Glow was only $5. (right?!) Cash or credit is accepted and there was plenty of parking. I love that the parking was so reasonably priced – since there aren’t many nearby places for parking, I feel like they could’ve very easily charged $15 or $20 per car (like many other events), but $5 was not bad at all for parking. 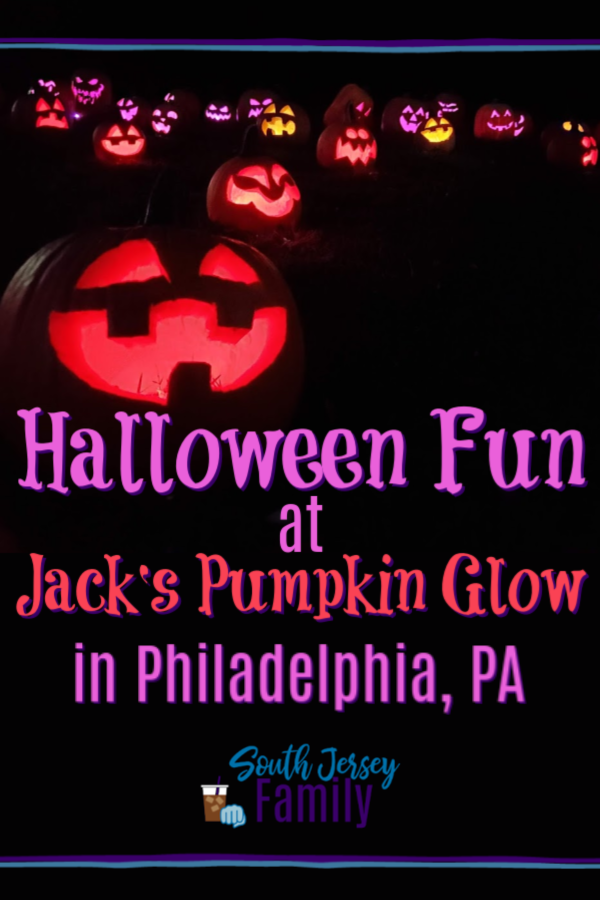 Once you park, you can walk on over to Jack’s Pumpkin Glow. If you have a timed ticket, feel free to walk over BEFORE your time as there are activities, shopping, and food/drinks available for you to enjoy before you enter the attraction. You’ll also be happy (?? it’s a parent thing!) to know that there are MULTIPLE porta-potties in this area in case you or your family need to use the restroom before seeing all the pumpkins. When we went, they were all pretty clean and well stocked with toilet paper. There’s also a foot-pump operated sink with soap nearby to wash your hands.

When it is time for you to enter the exhibit, walk over to the big tent with your tickets ready and have bags unzipped/open for inspection. This line moved pretty quickly for us, so if there’s a long line, don’t worry! After you get your tickets scanned, you go to stand in a holding area to await your timed entry.

Once you get inside the exhibit, take.your.time. There is SO much to see and chances are you’ll only be attending one time this year, right?! Take the time to soak it all in and see the sculpted details up close. From what I could tell, most of the pumpkins on the ground were real pumpkins lit by battery operated “candles.” Take your time and see if you can recognize any of your favorite characters! We saw (I think!) the Creature from the Black Lagoon, multiple characters from Nightmare Before Christmas, mummies, monsters, and numerous takes on the classic jack-o-lantern smile. They were all so so cool! We all loved seeing the carved pumpkins. 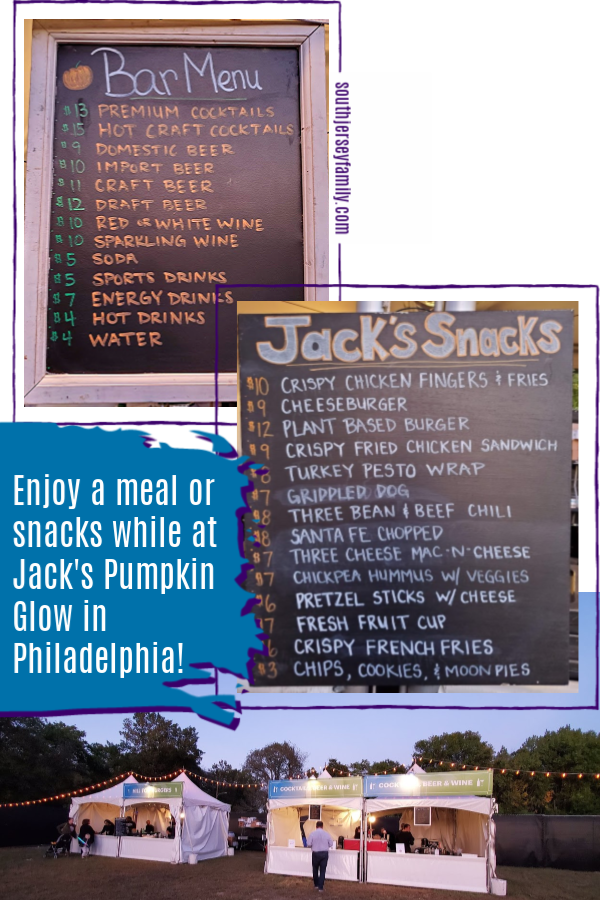 In addition to the carved pumpkins on the ground, many of the exhibits feature sculptures made from multiple pumpkins or giant pumpkins with detailed carvings. Most of those pumpkins looked to be either foam or plastic pumpkins. Honestly, I was a little bummed about that since I was under the impression that ALL the pumpkins were real (although a quick look at their FAQs would’ve let me know to expect faux pumpkins), but I totally understand that it would’ve been an incredible undertaking to create, and preserve, all those sculptures if they had been made from real pumpkins. Still, the sculptures were all impressive and the amount of detail put into each and every one of them was amazing. Jack’s Pumpkin Glow sure did partner with some amazing artists to create this exhibit!

All in all, it took us about an hour to walk through the entire attraction. This included me stopping at every exhibit to take photographs, though, so your timing may vary. Either way, the entire family really enjoyed this opportunity to experience some unique Halloween family-friendly fun! 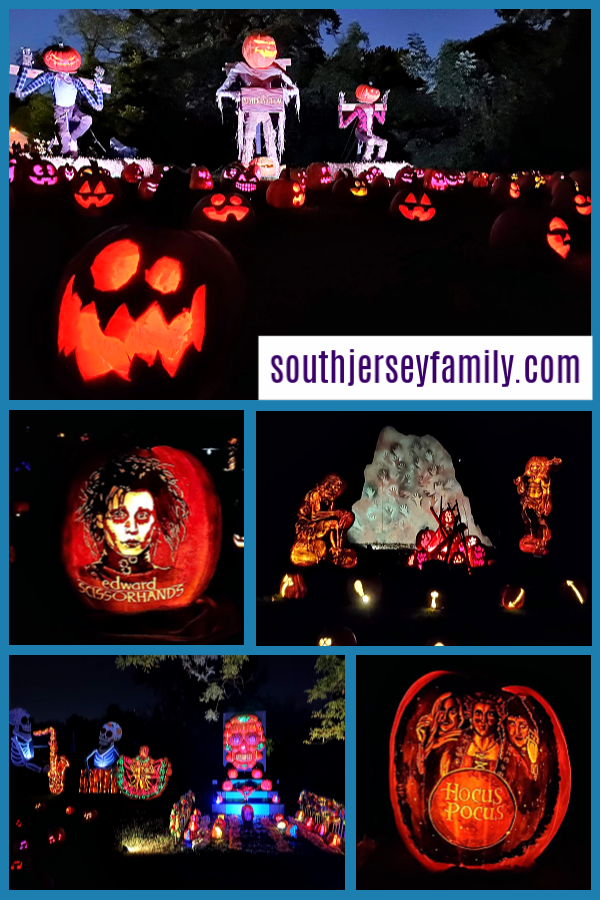 After we walked through all the exhibits, we were all so hungry! It was nearing 8pm and, if we waited to eat until we went home, it would’ve been close to 8:30 and the boys were ALREADY cranky and hungry. We decided to eat in the food area at Jack’s Pumpkin Glow! When we walked in, The Mister and I both had to get wristbands to let people know we were 21+ (even though we weren’t getting alcohol – I don’t know why, but it wasn’t a big deal, so we went with it). The boys each ordered mac & cheese, I got a low-carb cheeseburger (they switched the bun out for lettuce), and The Mister got their chili. We all shared a side of fries and The Mister’s Chili came with some of the most delicious cornbread I’d ever had in my life (yes, I know cornbread isn’t keto, but I’m a foodie, so I just had a bite, m’kay?) All of the food was delicious and we all left with happy bellies! If you need a snack or attend during a meal time, the food stand at Jack’s Pumpkin Glow is a great option!

If you get to attend Jack’s Pumpkin Glow, or have already attended, feel free to tag South Jersey Family when you post your photos on social media. We’d love to see them!